Thanks for keepin' the seat warm Bill. From the looks of things, the Bucket Hat Bill experiment seemed to go exactly as I'd imagined. HEAVY on the humble brags (you met Brooks, WE GET IT!) and, not to be upstaged by my wedding, he comes right back with an entire issue dedicated to his own birthday. 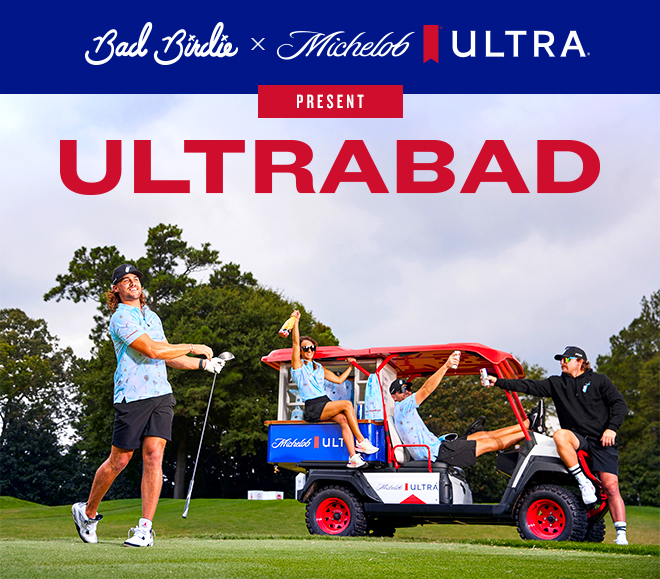 Welp, scratch that on the non-Bill related news, as his never-ending love for Micky ULTRAS led to one of our biggest collabs of the season.

Yep, for those who didn't catch it, we dropped our Michelob ULTRA collab (ULTRABAD) this week and let's just say, the hype was VERY real.

So much so, that the OG hype factory, HYPEBEAST even did an unboxing vid & article. 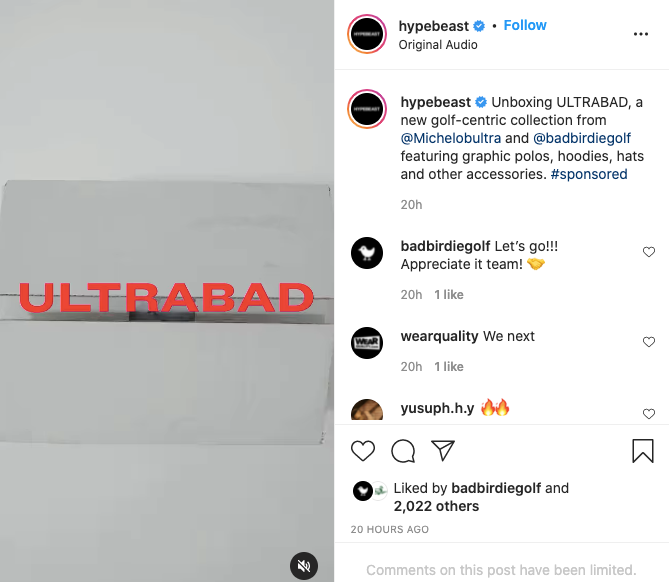 You know how we know it's cool? Because the guy in the unboxing vid has tattoos on his arms. Sweet sleeves, bro.

Bryson just can't get out of his own way...
HE'S A GREEN TEXT BUBBLE GUY

Bryson absolutely shined at the Ryder Cup. Then went on to advance fairly deep in the World Long Drive competition. I mean, the guy is riding a massive "people finally like me" wave when Scottie drops this... Of course Bryson is a Samsung guy.

Oh, is the camera THAT MUCH better?

Foldable screens are the wave of the future, huh?

Just give in to our Apple overlords and call it a day, NERD.

We finally get Brooks v. Bryson!
SETTLE IT ON THE COURSE, FELLAS 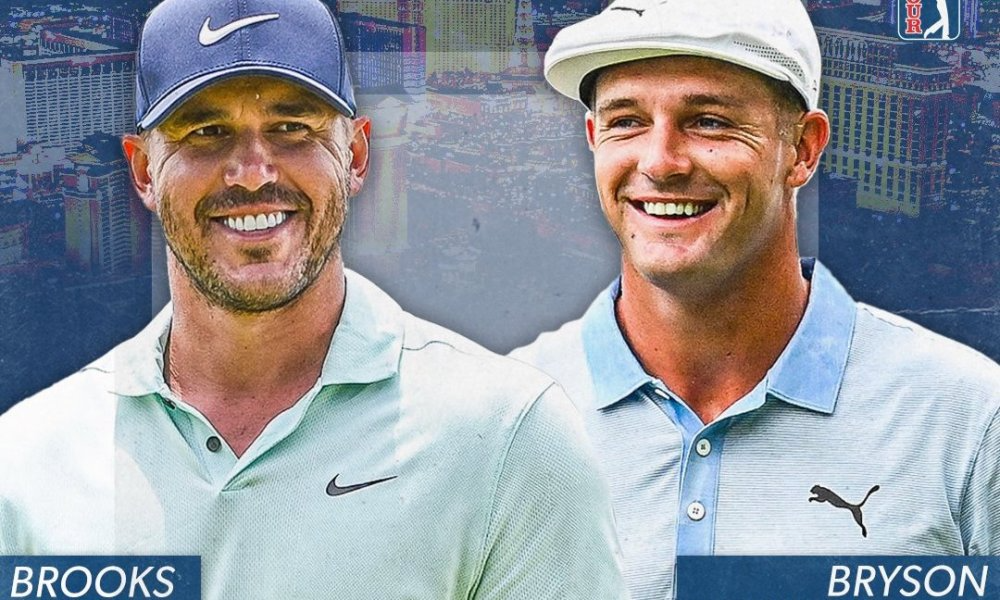 And now let's bring in the curmudgeon who was probably the most pissed about the Ryder Cup group chain having green bubbles—Brooksy.

You've seen this story a million times. Two rivals squaring off one on one for all the glory over... 12 holes of golf just off the Vegas strip?

Yep, the Friday after Thanksgiving, Brooks and Bryson are officially confirmed to compete in The Match V at The Wynn, in Las Vegas, for a 12 hole match.

My Take: 12 holes could actually be the perfect fix to The Match woes. While the 12 hole length is super odd and anti-establishment, all four previous versions of The Match felt wayyyy too long. When you're just watching four, and now two, people play golf, it leaves a heavy responsibility on the hosts and players to keep it lively.

Sprinkle in Sir Charles as the in-studio host with maybe Phil and JT on the course as field reporters chirpin' in the guys' ears, and The Match producers will finally be zeroing in on perfect format.

EVERY ROSE HAS ITS... TROPHY WALL! 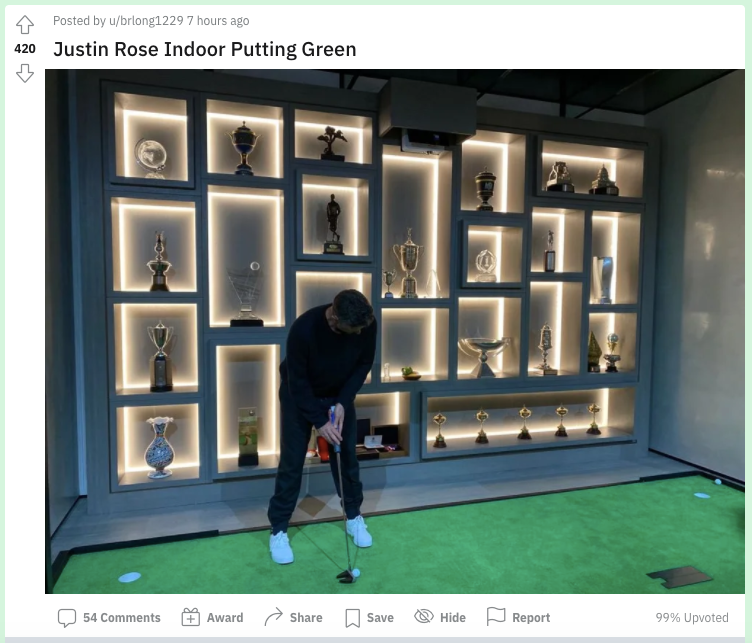 I include this mostly as some interior design inspo for Bad Birdie HQ.

The lighting is so severely game show-esque that I'm expecting Howie Mandel to come around the corner at any moment with a squad of scantily clad models carrying briefcases. Perhaps something else for BB HQ to consider...

LET'S HEAR IT FOR THE GROUNDSKEEPERS 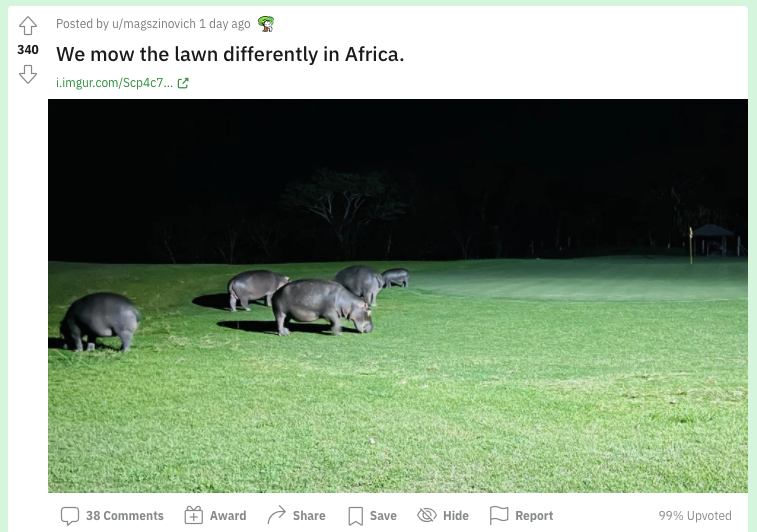 Fun fact about me that I always use for two truths and a lie—I was a part-time zookeeper when I was at Syracuse University (Go Orange!) stationed primarily in the elephant exhibit.

That's really it. I figure Bill got so much time to brag about himself, why not slip some Scott-flavored brags in here.

Is getting the chance to make an elephant roll over after I spent my day shoveling their $#&T the same as hanging with Jena Sims and Brooks for pretty much every golf tournament? No.

But just let me have this one until BB starts sending me on the road.