Welcome, Breakfast Ballers. There's no doubt you cruised through the week and are ready to toss some darts this weekend. If this wasn't a cruiser of a week, no worries, the skillet is still sizzling. We got this.

We're throwing it back a few months to the middle o'March when normally we'd be smack dab in the middle of one of the best times of the year. Yup, we're talking 'bout The Big Dance. The Cinderella stories. The buzzer beaters. The brackets.

While we're glad the players and coachers were safe this year, we were nothing short of bummed to miss out on the sweet chaos that is the office bracket pool. But long ago we learned to listen to that little voice in our head that blasts in at 2am screaming, "Don't stop...believing."

Buckle up and open wide for a few heapings of prime cut nostalgia served up by... 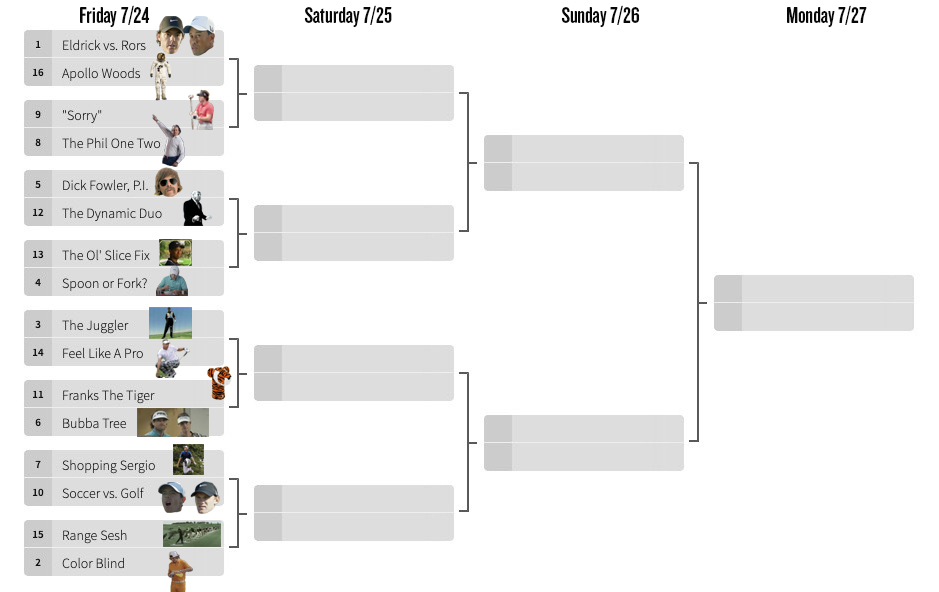 Click for the trick shots, stay for the Tiger hair burn on Rory. OUCH. He still may not have recovered.

This is totally what they meant by "one giant leap for mankind," right? Casual anti-gravity stingers, anyone?

WATCH HISTORY BEING MADE

Every par 4 is driveable if you swing hard enough and believe in yourself.

Lefty has some moves up his sleeve and we gotta ask, "Is Phil the golf GOAT of social media?"

Dick Fowler might win a major before Rickie. We're all about it.

Could have been the trailer for Fast and Furious 11. Still might be. Two legends fight crime to save what they cherish the most. Hang around for a surprise cameo.

These Tiger "Golf's not hard" commercials had us running to the muni back in the day. Also, The Tour needs to bring cardboard cut-out galleries to the course tomorrow.

WATCH HOW TIGER FIXES HIS SLICE

Jordan Spieth and his caddy making some tough lunch decisions. Don't quote us, but isn't this how the spork was invented?

Tiger Woods teaching an entire generation what to do while waiting for the group in front of them to clear.

What's in Tiger Wood's bag? JDay and Rors can help us out with that.

CAN YOU READ THIS PUTT?

There should be an entire spinoff series of Rory and Wayne Rooney competitions. Arm wrestling. Muay Thai sparring. Pickle jar opening. Someone make it happen.

WATCH TO SEE WHO WINS

Tiger woods helps some players on the range. Kind of.

THE PROOF IS IN THE SWING